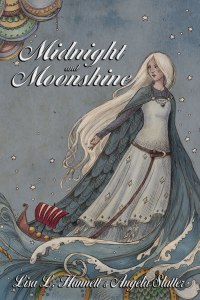 And thus we threatened and thus it came to pass … or rather will do so in November this year. Yes, we have a cover for Midnight and Moonshine, we have stories, we have an Introduction by Kim Wilkins, a release date, an accommodating publisher, and we have details.

Pre-ordering can occur here – either the trade paperback or the fancy-schmancy hard cover limited edition with our paw prints on it.

What is Midnight and Moonshine about? We’re so pleased you asked:

The gods are dead, but will not be forgotten.

When Mymnir flees the devastation of Ragnarok, she hopes to escape all that bound her to Ásgarðr — a heedless pantheon, a domineering brother, and her neglectful father-master, Óðinn. But the white raven, a being of memory and magic, should know that the past is not so easily left behind. No matter how far she flies, she cannot evade her family…

In planting seeds of the old world in the new, Mymnir becomes queen of a land with as many problems as the one she fled. Her long-lived Fae children ignite and fan feuds that span generations; lives are lost and loves won because of their tampering. Told in thirteen parts, Midnight and Moonshine follows the Beaufort and Laveaux families, part-human, part-Fae, as they battle, thrive and survive in Mymnir’s kingdom.

Midnight and Moonshine is a collection of interconnected tales with links between them as light and strong as spider-silk. From fire giants to whispering halls, disappearing children to evening-wolves, fairy hills to bewitched cypress trees, and talking heads to moonshiners of a special sort, Midnight and Moonshine takes readers on a journey from ninth century Vinland to America’s Deep South in the present day. Hannett and Slatter have created a mosaic novel of moments, story-tiles as strange as witchwood and withywindles.

Midnight and Moonshine is a rich tapestry of dark fantasy, fairy tale and speculation.

When will the book be available? November 2012.

Are Lisa and Angela available for interview? Yes, contact them either via their websites or via Russell B. Farr at Ticonderoga Publications (editor@ticonderogapublications.com).

Who did that awesome cover? The magnawesome Kathleen Jennings.

4 thoughts on “Midnight and Moonshine — the release!”