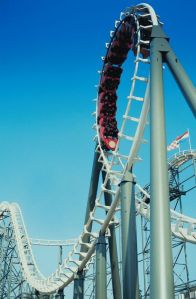 Last day of the year… so like many of you I’m feeling the urge to commit a bit of retrospective bloggery.

2011 sucked. Then it was awesome. Then it sucked again. Then it got better than ever… And so on. This was the rollercoaster year to beat all others, and it often felt like I was the poster child for the proverbial Chinese curse of “living in interesting times…”

At this time last year, I was staring down the barrel of writing the final three chapters of my PhD thesis. I had January to do it, so I became a hermit and wrote and wrote and wrote. After six years, endless hours of agony, a good dollop of joy, and the hardest work I’d ever done, I finished the draft. HUGE YAY! And then I discovered a Danish scholar’s brand new body of work on a topic that was unnervingly close to mine — so my head exploded. Rewriting ensued, as did tears, frustration, more tears — aka HUGE LOW. But as we know it all worked out, so I’ll move on.

At the same time, I was finishing my first collection of short stories, Bluegrass Symphony. Edits, writing, rewriting all happened while I was freaking out about my thesis… and while my lovely sister and her boyfriend were visiting from Canada (HUUUUGE YAY!!!) It all got done — with time to spare! — and suddenly I found myself with a complete thesis AND a complete book! (YAY!)

Thus armed, I applied for my dream academic job (in English and Creative Writing) — but didn’t get an interview (BOO!). But then discovered that nobody had gotten an interview, and so they would readvertise in a few months (YAY!) and so I still had a chance.

Along with my dear Brain, Angela Slatter, I signed a contract for a second collection of stories, Midnight and Moonshine — which we’re co-authoring (HUUUUGE YAY! We had so much fun collaborating on ‘The February Dragon’!)

I was nominated for three Ditmar awards (YAY! and I had a ball at Swancon) and Angela and I won the Aurealis Award for ‘Best Fantasy Story 2010’ for ‘The February Dragon’ (HUGE YAY!)

Had a massive teaching workload this year — four topics, over 200 students, marking marking marking until I thought my eyes would bleed. Even so, teaching was a bit YAY (because I had some wonderful students!) and a lot BOO (see: marking, eyes bleeding).

The dream academic job was readvertised (YAY!) I applied and had an incredibly strong application (YAY!) but failed to get an interview because of a technicality (not going into details, sorry). Saying ‘HUGE BOO’ here would actually diminish how much this experience affected me. This all happened in June right after I submitted my thesis for examination. So after that great high (thesis finished!!) the whole Job Debacle of 2011 was without a doubt the nadir of my year.

What do they say about reaching rock bottom? The only way is up? Well, that’s pretty much what happened in the second half of 2011. Bluegrass Symphony was published to great reviews and was launched by the ever-fantastic Sean Williams (YAAAAAAAAAAAAY!). My PhD thesis passed with two As, so I didn’t have to change a word (although I did change an accent on one of my Icelandic translations) YAAAAAAAAAAAY!

Then another job-related BOO: I quit my non-teaching job after working there happily for 4 years. Again, not going into detail here, but needless to say, it sucked.

But then another HUGE YAAAAAAAAAAY: writing time! And I got the Arts SA grant I applied for, so that writing time continues on, uninterrupted, well into 2012!

To sum up, in terms of dayjobbery, this year has blown. In terms of writing, however, this has been the most awesome year yet:

Carousel
Down the Hollow
Them Little Shinin’ Things
Fur and Feathers
From the Teeth of Strange Children
The Wager and the Hourglass
The Short Go: A Future in Eight Seconds
To Snuff a Flame
Depot to Depot
Commonplace Sacrifices (first published in On Spec 2009/2010)
Wires Uncrossed
Forever, Miss Tapekwa County

Brain and I have concocted the Lair of the Evil Drs Brain, which kicks off in January with an interview we recently did with China Miéville;

2 guest posts for the Shimmer blog which you can read here and here;

A guest post for Lee Battersby‘s ‘Treacherous Carrots” art series, which you can read here;

An essay on the weird illustrations of Beardsley, Niffenegger and Gorey for Weird Fiction Review, which you can read here;

And a brief piece on the Weird West in fiction for Random House’s Suvudu site, which you can read here.