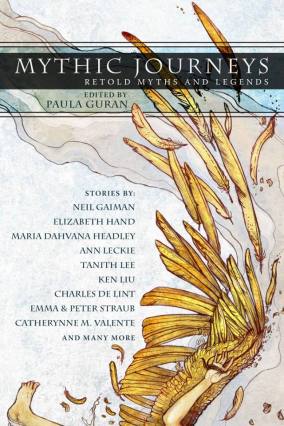 Delighted to say that ‘Seeds’, the first story Angela and I wrote for Midnight and Moonshine, is getting a second outing in this gorgeous new anthology edited by Paula Guran!

Myths and legends are the oldest of stories, part of our collective consciousness, and the source from which all fiction flows. Full of magic, supernatural powers, monsters, heroes, epic journeys, strange worlds, and vast imagination, they are fantasies so compelling we want to believe them true.

The authors of fantastic literature create new mythologies, heroes, and monsters. Retelling, reinventing, mixing the old with new insight and meaning. Their stories, like the ancient tales, entertain and often offer readers new ways to interpret and understand the world.

Drawn from diverse cultures, modern legends, and mythic tales are told in a variety of ways—amiable or acerbic, rollicking or reflective, charming or chilling—as they take us on new journeys along paths both fresh and familiar.

This new anthology compiles some of the best modern short mythic retellings and reinvention of legend from award-winning and bestselling authors, acclaimed storytellers, and exciting new talents in a captivating collection. Adventure with us on these Mythic Journeys…

Cover art by BreeAnn Veenstra and design by Claudia Noble