How to explain that a really rather nasty story sprang from watching a really adorable documentary? 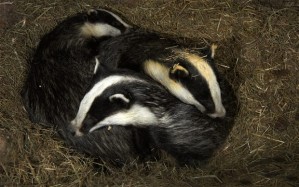 Angela loves badgers. Angela thinks they’re adorable. Angela might be slightly obsessed with them − to the point where she made Lisa sit down and watch the aforementioned documentary, Badgers − Secrets of the Sett. Lisa also enjoyed the documentary (or said she did) … the important thing to remember is the idea that stuck with her: that badger females can keep fertilised eggs in stasis in the womb for months, until it is safe for them to begin gestation.

As if that’s not cool enough, they can also store more than one embryo at a time, fertilised by different boars.

So, when we were looking for a first story for the collection, Lisa brought up this intriguing feature and said, ‘What if a woman could do that?’ We took it further: what if a woman could have absolute control over her reproductive system? What if she could decide how many babies to have, and when, and with whom? And what if big business, in a world where fertility rates are dropping like an out-of-control elevator, found a way to take back that control of a most intimate process?
Thus Robin was born. She was hard to write; she’s not a pleasant character, but there is something one grudgingly admires about her tenacity. The story also challenged all the pink and fluffy ideas about motherhood being a wonderful thing, and examines the harsher side for those who can, and those who cannot, have children.
If this tickles your fancy, you can get yourself a copy of The Female Factory here.