Last night, after a day mostly filled with revising the novella I’ve been working on for the better part of a month, we went down to the beachside open-air cinema to watch The Labyrinth. Like most of you, I’ve seen this film about a gazillion times — but never before have I seen it up on the big screen, in all its 1980s glory.

And, of course, it was glorious. 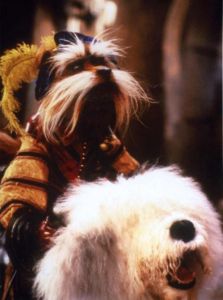 But I’m not here to post about the brilliance that is The Labyrinth, nor the profound nostalgic joy it gave me to see it again (although it is brilliant, and I was utterly verklempt while watching it) but instead to talk a bit about Sir Didymus, and the epiphany he gave me last night.

Now, out of all the delightful characters in The Labyrinth, this whiskery fox-dog-creature has never been up there with my favourites (who, for the record, are Ludo, the little worm, and the talking hat). For one, despite his finery, I’ve always found something about this puppet — aesthetically speaking — kind of repellent. It’s the weirdly human teeth, I think, and the strange eyeliner around his beady eyes. I’ve always found even the ugliest of the goblins to be more beautiful than flouncy old Didymus here.

Nevertheless, he’s always provided excellent comedic value (in a film that doesn’t lack it) and he never failed to make me chuckle — even when I was avoiding looking at those awful teeth of his.

But last night, for the first time, I saw Sir Didymus not just as a scrappy faux-chivalric hero, not just as a delusional terrier with no sense of smell, not just as the provider of well-timed one-liners, but as — possibly — the best little spirit animal a writer could ask for.

Now, I’ve just said I think he’s delusional — his inability to see the “reality” of his situations is, obviously, the greatest part of the joke with Sir Didymus’ characterisation.

But as I watched him confront his foes — all of whom were bigger, more powerful, more numerous than he was — I realised that what Didymus has in spades isn’t delusion but self-confidence. A deep-seated inability to see himself as smaller, less worthy, less capable than the folks he comes up against in his world. No matter how many goblins charged at him, he wanted to rush straight into the thickest thick of the battle:

Didymus: You’re going the wrong way! The battle’s BEHIND us!

Everything that was hard or scary or ostensibly insurmountable in the Goblin City was exactly what Sir Didymus was uber-keen to confront. Not only that, no matter how ridiculous the odds, he never once questioned if he’d succeed. This little Muppet on his sheepdog steed is the embodiment of unshakeable self-belief.

[Upon reaching the Goblin City]
Didymus: [loudly] Open up! Open the door!
Sarah: Sssh! Sir, Didymus, we must go quietly.
Didymus: [knocking on the door] Open up! Open up right now!
Sarah: Sir Didymus, you’ll wake the guard!
Didymus: Well, let them all wake up! [hammers on the sleeping guard’s helmet, almost waking him] I shall fight you all to the death!
Sarah: [restrains him] Sir Didymus, for my sake, hush!
Didymus: But of course, for thee, anything! But… I’m not a coward?
Sarah: No.
Didymus: And my sense of smell is keen?
Sarah: Of course–
Didymus: [yelling] THEN I SHALL FIGHT ANYONE, ANYWHERE, ANYPLACE, ANYTIME!!!

He clearly cares what others think of him — hence his concern about having a keen sense of smell and knowing others think he’s no coward, above — but he sure doesn’t let these opinions (or lack thereof) change how he views himself. He knows he’s not a coward. He believes his smell is keen — despite the fact that his perception of “good smells” does not align with the rest of the characters’ views — and he’s always ready to fight.

Now, I’m not trying to say that writers should adopt Didymus’ combative outlook. There’s enough success for all of us out there, as far as I’m concerned, that there’s no need to see fellow writers as competition or as foes to defeat. But what really struck home for me is that right about now, when I’m confronting the second draft of my next novel, revising a novella, and compiling a new short story collection — in other words, working on a lot of things that are all currently in a state of drafty possible-shitness — I could really do with channelling a bit of Sir Didymus’ spirit.

I don’t know why writers are simultaneously bold enough to throw our stuff into the world as if it belongs there (which is does) and self-doubting enough to worry ourselves sleepless before, during, and after the writing process is through on any given project. I’m not talking about impostor syndrome so much as that pervasive, niggling dread most of us have experienced at least once in our careers. You know the one: it’s the I’ve just spend X-number of days writing complete shit that no one in their right mind is going to want to read and if they do read it they’re going to see how shit it is and so they’re going to think I’M shit and Oh FFS why don’t I just spend the rest of my life binge-watching Netflix kind of dread that gives us premature wrinkles.

So next time that kind of thinking starts peck-peck-pecking its way into our brains when we could be using our writing energy more fruitfully, I’m going to suggest we summon Sir Didymus, that rascal of a spirit animal, before plunging wholeheartedly, confidently (and, maybe, delusionally but happily) back into the fray.